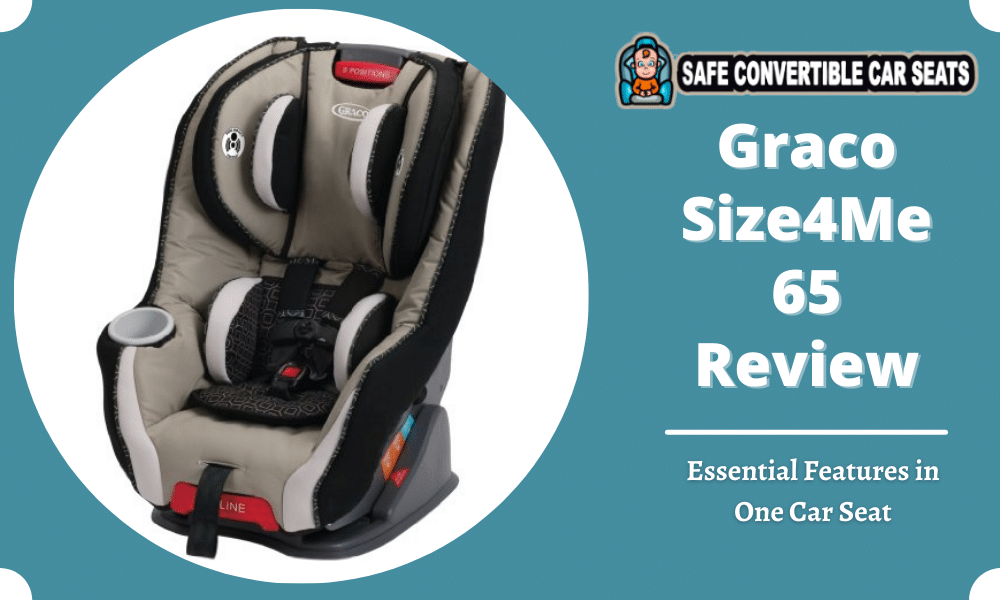 Graco makes a huge range of car seats, and their convertible car seats are incredibly popular. There are many different makes, models, and features, and a wide range of pricing options to choose from.

The Graco Size4Me 65 is a convertible Graco car seat that, for many parents and Graco fans, has all the essential features of a Graco convertible in a single model.

Who is the Graco Size4Me 65 Most Suitable For? 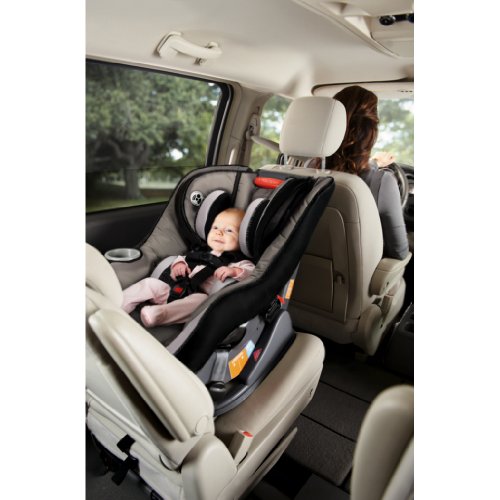 The Graco Size4Me is a great car seat for parents who want a simple, affordable, reliable car seat that has thoughtful design details that make it more comfortable for growing children. The harness adjusts easily, and the cover removes easily for washing.

The ribbed seat edges are placed where they don't rub on a child's legs, and it has built-in harness covers to keep it from rubbing on the neck. The good range of harness and buckle positions make it simple to get the correct fit at every stage of a child's growth, and it's been engineered to meet or exceed federal safety standards.

It's a compact size that fits in a wide range of vehicles, and isn't as heavy as many convertible car seats. The InRight LATCH system even makes it simple to convert between modes or move between vehicles. It's a reliable, high-quality convertible car seat that will keep a child safe and comfortable for years.

Pros and Cons of Graco Size4Me 65 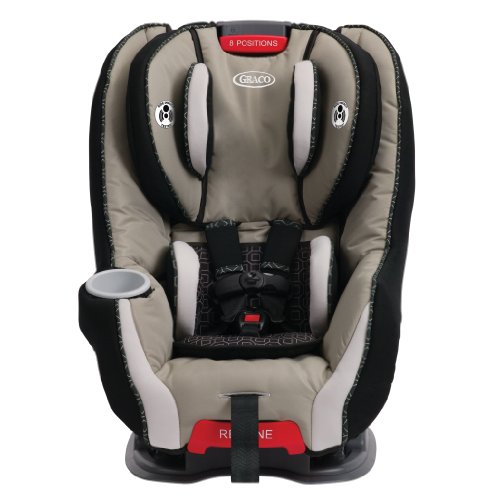 The Graco Size4Me is a convertible car seat that can hold and protect children from 4-65 pounds, or up to 7 years. It has all the features that Graco car seat owners love. It has the InRight LATCH installation system that makes installation fast and easy, in just seconds, with the easy to read level indicator and an audible click that lets you know it's installed correctly. It also has the Simply Safe

Adjust harness system, where the harness and headrest are integrated for incredibly simple adjustment that never needs rethreading. And the Graco Size4Me also has a RapidRemove cover that comes off quickly and easily, without disturbing the harness, and can be machine washed.

For many parents, these features are the must-haves in a convertible car seat, and with the Graco Size4Me, they are all available.

What is This Model’s Child Height Limit?

What is This Model’s Child Weight Limit?

What year did Graco Size4Me come out?

Graco Size4Me can be used for what age of kids?

Graco Size4Me can be used for newborn kids to 9-year-old.

How long do Graco Size4Me car seats last before they expire?

How much does Graco Size4Me car seat weigh?

How wide is the Graco Size4Me?

What is the height limit on the Graco Size4Me carseat?

Shell height of Graco Size4Me carseat is 28 inches. It's height limit in different positions are:

Will a Graco Size4Me fit in any size car?

The Graco Size4Me is a lightweight child car seat weighing in at only 19.5 pounds making it the best convertible car seats for small cars.

The MySize 65 and Size4Me 65 are identical, except for the covers and retailer availability.

What is included with the Graco Size4Me 65?

The Graco Size4Me 65 comes with a removable newborn insert pillow.

The Graco Size4Me 65 owner's manual can be found here: 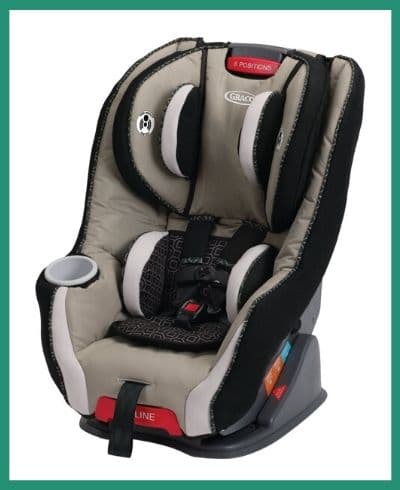 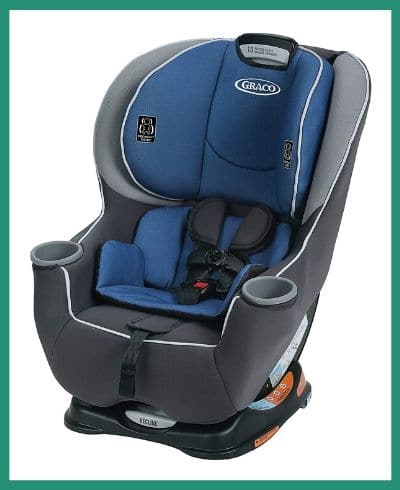 The Graco Size4Me 65 is a safe, reliable convertible car seat from the respected team at Graco. However, if you are looking for a near-identical Graco convertible with a few more features at a better price, consider the Graco Sequence. The Sequence is a slightly newer model than the Size4Me, so it has some design advantages that parents will appreciate.

The Size4Me converts to forward-facing a bit earlier, at as few as 20 pounds, while the Sequence can't be converted to front-facing until 22 pounds. However, extended rear-facing is the safer choice, and it's best to keep children rear-facing for as long as possible, up to the rear-facing height and weight limits.

In addition to these features, the Graco Sequence also has:

The Graco Sequence only has one buckle position instead of two, and does not have the InRight LATCH system that the Size4Me has. LATCH installation with the Sequence is still fairly fast and simple, but is not as easy as the InRight system. And though the Sequence cover is removable and washable without rethreading, it isn't as simple as the Size4Me RapidRemove cover.

Because the Sequence has more recline angles, it may be a better fit in a wider variety of vehicles, even though it is 1.75 inches taller. And, depending on your upholstery choices, the Sequence is a few dollars less expensive than the Size4Me.

Both the Graco Size4Me and the Graco Sequence are good, reliable convertible car seats that are easy to use and easy to clean. For many parents, the Graco Sequence might be a better buy, with more harness and recline positions, two cupholders, and a longer maximum life span.

However, the Graco Size4Me does have slightly easier installation, with the InRight LATCH system, and the RapidRemove cover. The time saved on these little functional details may be worth a few more dollars for parents who frequently move or adjust the car seat.

When it comes to convertible car seats, the Graco Size4Me 65 is one of the better choices on the market. The price is about mid-range, but it is worth it not to have to purchase another seat in a year when they have outgrown their rear-facing seat.

The Size4Me 65 is both a rear-facing and forward-facing convertible car seat. Even more importantly, it passes crash tests with flying colors. It uses the LATCH system to secure your little, and it has push-on LATCH connectors that reduce human error when you are installing the seat. Also, it has separate rear and forward-facing LATCH straps. 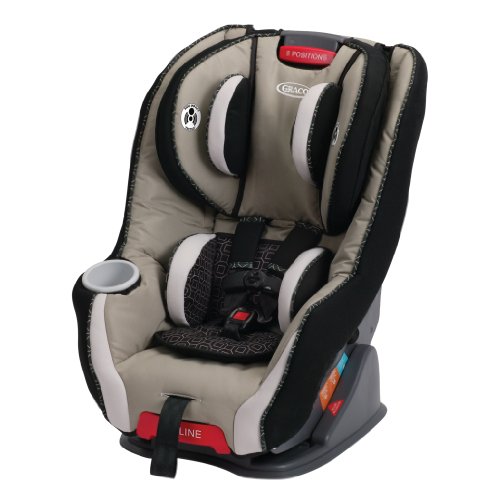 The ease of installation and use for the Size4Me 65 is straightforward and simple. The Simply Safe Adjust no-rethread harness makes it so easy that you may find you can do it with one hand.

If you have a smaller sized car, the Size4Me 65 may not be the best choice. It has a wider than average base and takes up a fair bit of room in the backseat. However, the size allows you to take trips or commutes while your child is comfy in their seat. It has eight different headrest positions and three recline positions.