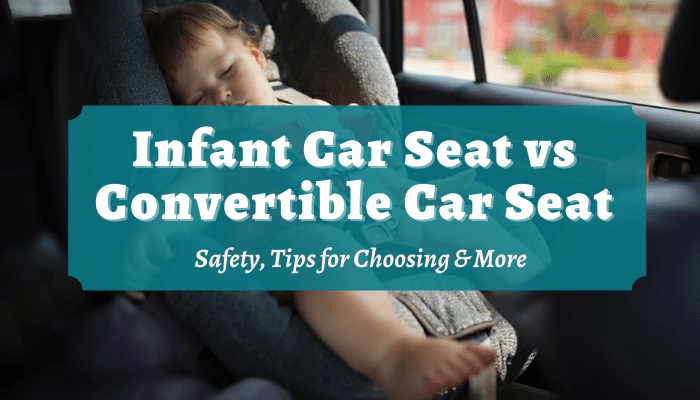 For new parents, having a baby can be an exciting and joyous, yet stressful experience. Before having the baby, parents will spend many days making sure that they have everything they need to keep their baby safe and comfortable. One of the most important of these essentials is deciding what car seat to use.

If you’re not sure what you’re looking for, buying a car seat can be an overwhelming task and can spark questions that you didn’t even know needed answering. For example, what’s an infant car seat? What’s a convertible car seat? What’s the difference between the two? How do I decide which car seat I need? I mean, aren’t they all technically the same?

This article will strive to provide detailed answers to these questions so that when you buy your first car seat, you can feel confident in that decision. At the end of the article, I’ll also answer frequently asked questions regarding if one type of car seat is safer than the other and how to tell when to transition your little one from one to the other. 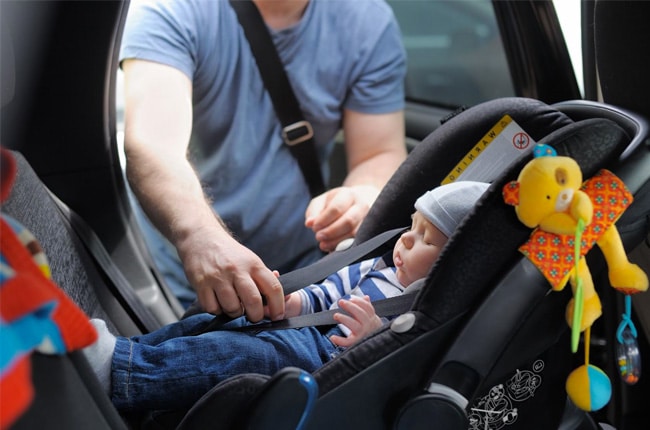 What is an Infant Car Seat?

How Safe Are Infant Car Seats?

If they’re being used correctly and have been installed properly, infant car seats can be very safe to use. I won’t go as far as to say that it’s safer to use than any other type of car seat, but they’re pretty safe when they’re used right.

According to the American Academy of Pediatrics, infant car seats should only ever be used in the rear-facing position. It’s also strongly recommended that you bring your child home from the hospital in an infant car seat. Once your child has reached or exceeds the height and weight requirements outlined by your car seat manufacturer, that will be the only time that they should transition to a forward-facing car seat.

In an article on Today, a mother recounted the tragic story of losing her 13-month old daughter who passed away due to falling asleep in her car seat. When a child falls asleep in their infant car seat, they’re falling asleep at a reclined angle, which can cause Positional Asphyxia - a situation where the baby’s airways are cut off due to their sleeping position.

As I said earlier, if they’re being used correctly, then infant car seats can be a great and safe way to get your baby from point A to point B.

Why Choose an Infant Car Seat?

In addition to that, most infant car seats are designed to fit different types of bases. So, not only can they be removed easily, but they can also be installed in different vehicles. With infant car seats, it’s convenience on top of convenience, which is why most parents choose them as opposed to rear-facing convertibles (we’ll get into what those are in a bit).

What to Look for in an Infant Car Seat

When purchasing an infant car seat, there are several key factors that you’ll want to keep your eye out for. They include but are not limited to:

What is a Convertible Car Seat?

How safe are convertible car seats?

Like any other car seat, convertible car seats are very safe if they’re used and installed correctly. However, a common mistake that most parents make when using a convertible car seat is transitioning their baby from the rear-facing to the forward-facing position too early. Doing this can put your little one at risk of serious injury, so you should know, without a shadow of a doubt, when you should convert your car seat.

Generally, you should follow your car seat manufacturer’s recommendation for when to transition your child to the forward-facing position. According to Safe Kids Worldwide, children should ride in the rear-facing position until they’ve met the maximum height and weight requirements. In addition to that, most car seat experts will tell you that your child should ride in the rear-facing position for as long as possible because, as an infant/toddler, it’s the safest way your baby can ride.

Why Choose a Convertible Car Seat?

Car seats can be pretty expensive, and having to buy more than one can run hundreds to thousands of dollars. What’s great about convertible car seats is that they’re with you for a long time, so you don’t have to worry about buying a new car seat after your child has outgrown their infant car seat. And, they’re made to last until your child enters the last stage of their car seat, meaning you won’t have to buy a new car seat for, potentially, years.

Also, because convertible car seats can be used from infancy, most of them are engineered with a surplus of safety features to accommodate infants, toddlers, and small children. You can rest assured knowing that your child will have everything they need to feel comfortable and secure while riding in the car.

What to Look for in a Convertible Car Seat

If you’re interested in purchasing a convertible car seat, here’s a few key factors that you should look for:

What’s the difference between an infant car seat and a convertible?

When to switch from infant car seat?

Buying a car seat can be a daunting task, but with the right information, it can be an easy-going experience.

Infant and convertible car seats are the most popular type of car seats, and as a parent, knowing the difference between the two is vital in making sure that your child rides in the car safely.

Remember, your child should ride in the rear-facing position for as long as possible, and you should only transition to a forward-facing convertible car seat once your child meets the maximum height and weight limits of their infant car seat.

If you have any more questions regarding transitioning your child from an infant to a convertible car seat, please contact your car seat manufacturer.

Car Seat Accessories & Clothing Safety: What are Safe to Use in a Car Seat?

How Much Does It Cost To Buff A Car? (Answered)

How Much Coolant Should Be in the Reservoir? [Answered]