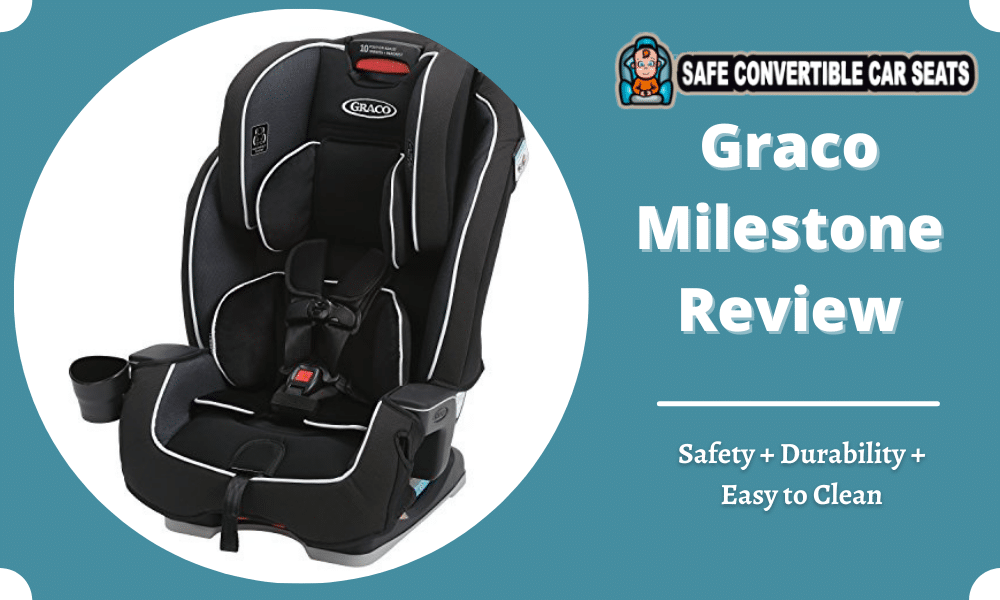 If you're looking for a single car seat that can meet all of your child's needs over time, it's more important than ever that the car seat be extremely safe and durable, easy to use and clean, and have a variety of adjustment options to fit a growing child.

If that's what you're looking for in a convertible car seat, you should check out the Graco Milestone. In this review we take an in-depth look, to help you make an informed buying decision.

Who is the Graco Milestone Most Suitable For? 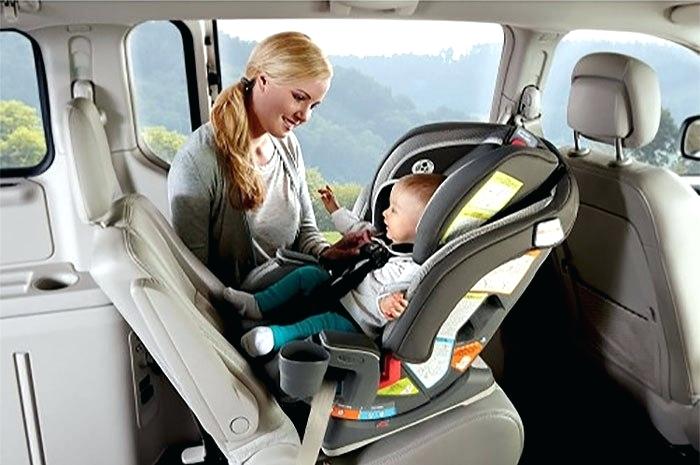 The Graco Milestone is designed for parents who want a high-quality, long-lived convertible car seat that they can use for years to come, without spending a fortune. Graco designed the Milestone as a more affordable alternative to the Graco 4Ever (detailed comparison below), with similar features and longevity, but at a lower price.

For parents who love the proven safety and quality of Graco car seats, and want a single convertible car seat that can comfortably protect a child for up to 10 full years, the Graco Milestone is an excellent option. Even better, among other car seats with this kind of longevity, it isn't as big or heavy, and installation is a snap. The Milestone is a great combination of convenience, safety, and value in a convertible car seat.

Pros and Cons of Graco Milestone 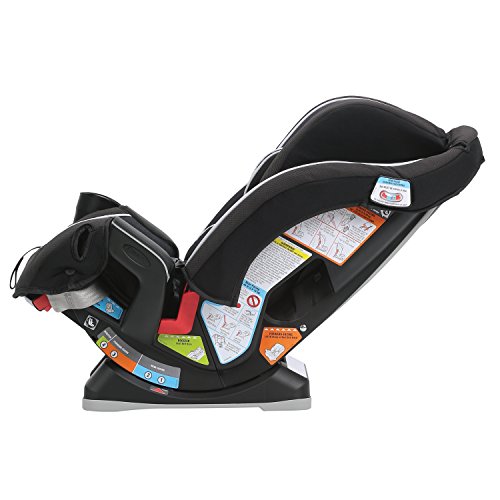 The Graco Milestone is a convertible car seat with an incredibly long life. It can fit and protect children from 5 – 100 pounds, or up to 57 inches in height, or up to the 10 year life span of the car seat. With that huge longevity, it may be the only car seat you need.

Even better, the Graco Milestone has all the features that both children and parents are looking for. The 5-point harness has 10 positions to correctly fit a growing child over time, but adjustment is so fast and simple it can be done with one hand and no rethreading.

The cover and cushions are easy to remove and clean, machine washable without rethreading the harness. And the installation system is literally a snap, with a fast and easy system that gives you an audible click to know it's installed correctly. It's a high-quality car seat, and a great value for the longevity.

What are this model’s NHTSA ratings? All car seats sold in the USA must meet or exceed strict federal safety and crash test standards, so the NHTSA does not rate car seats for safety. Instead, they offer ratings and evaluations for ease of use.

According to the NHTSA, the Graco Milestone has earned (for the rear-facing installation):

The Graco Milestone has earned a 4/5 star NHTSA ease of use rating for the forward-facing installation, and a 5/5 star rating for the booster seat mode.

What year did the Graco Milestone come out?

Graco Milestone can be used for what age of kids?

Milestone can be used for children from 0 to 12 years old.

How long do Graco Milestone car seats last before they expire?

How wide is the Graco Milestone?

How much does Graco Milestone car seat weigh?

What is the height limit on the Graco Milestone carseat?

The Graco Extend2Fit carseat height with headrest is 28.5 inches. But it has different height limit in different positions. They are:

Will Graco Milestone fit in any size car?

Graco Milestone will fit in any size car but the rear-facing mode in a compact car could be a tight fit, leaving less legroom for front seat passengers.

Can the Graco 4Ever in one recline?

Graco Milestone 3 across can fit in the following cars:

The Graco Milestone is FAA approved only with the 5-point harness and not in booster mode since airplanes have no shoulder straps.

What is included with the Graco Milestone?

The Graco Milestone comes with a removable support cushion for infants, and a detachable cup holder.

The Graco YouTube channel doesn't include installation instructions for this car seat, but YouTuber Kiddicare has made a great video showing installation in all three different modes, which you can see here:

Converting between installation modes in the Milestone can be difficult, and requires removing the cover. YouTuber TheNorthernLights has produced a video that specifically covers how to convert the car seat, which you can see here:

The Graco Milestone manual can be found here:

Graco Milestone vs. Graco 4Ever 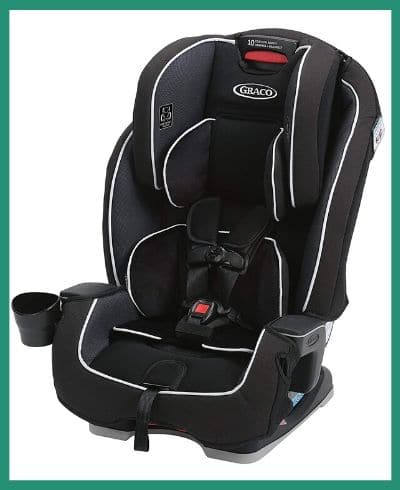 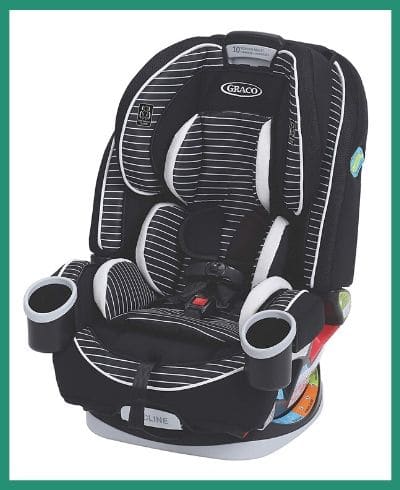 Many parents are torn between choosing the Graco Milestone or the Graco 4Ever. Both car seats are long-lived convertibles, both built and backed by the quality and safety of Graco. Both have a steel-reinforced frame, and have been subjected to rigorous crash and impact tests, so they are equally safe. Let's take a detailed look at both models.

It is also significantly more expensive than the Graco Milestone. It is important to know that the stage at which a child no longer needs a booster seat is contingent on their height, not their weight.

Children need a booster seat until they are 4'9” or 57 inches tall, and about 10 years of age. This means that a child who stays in a high-backed booster until they are 57 inches tall may not need a backless booster at all. Since both the Milestone and the 4Ever are rated for children up to a maximum of 57 inches and/or 10 years, they are both capable of protecting a child until they are ready to transition to an adult seat belt.

The Graco 4Ever is definitely a nicer car seat. The integrated cup holders don't get in the way when maneuvering around the car seat. The extra recline angle provides greater comfort in rear-facing installations. But is it worth the additional expense? Many parents don't think so, given the similarities between the two models.

Crash tests give parents an idea of how safe a seat is. The Milestone surpasses side-impact and safety crash standards. It utilizes the InRight LATCH system, which makes a clicking noise so that you know your little one is locked in safely. 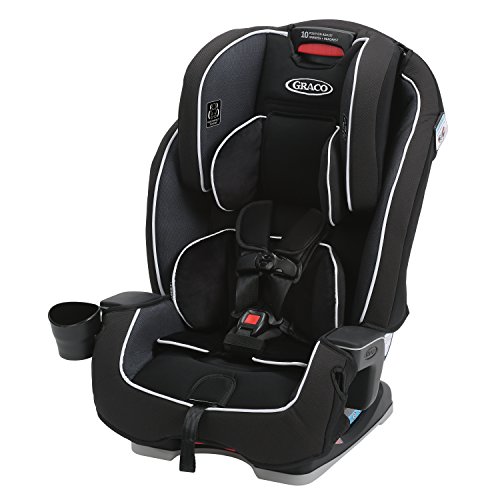 The Milestone has a long life because of its weight rating, ranging from 5 to 100 pounds. It is a big money saver, and it is already around the mid-point range as far as prices go. You do not have to rethread the harness, which solves installation issues, and it also allows for easy removal of the cover so you can clean up the inevitable accidents.

The Graco Milestone 3 in 1 Convertible car seat has rear-facing, forward-facing, and high-backed booster options. It scores well overall, though installation using the belt system is sometimes a hassle. It is an excellent option if you need one seat to last awhile, and at a reasonable price.

Graco 4Ever Review (2023): Will This Top-Selling All-in-One Meet Your Needs?