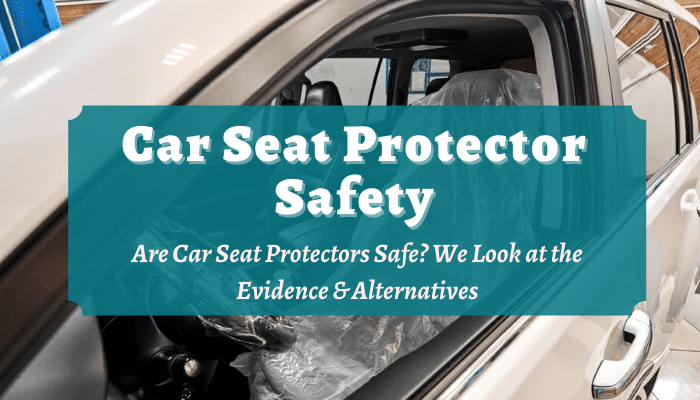 Car seat protectors are a popular accessory that has piqued the interest of parents all over America. Their popularity can be attributed to their ability to reduce mess and clean-up time as well as prevent damage that can be done to your vehicle’s upholstery by your child’s car seat.

Before we get into the article, I would like to quickly discuss what it means to be government-regulated…

According to the Cambridge Dictionary, government regulation is "a law that controls the way a business can operate...". Car seats are a prime example of something that is government-regulated. This means that there are certain requirements and standards that car seats have to meet to be certified safe to use. Without government regulation, anybody could make a car seat and say that they're safe to use, but there would be no way to prove that without some sort of regulation being in place.

To be considered safe to use, car seats must meet the Federal Motor Vehicle Safety Standard 213 (FMVSS). The FMVSS is what determines how car seats should perform and what criteria needs to be met to meet this standard. Car seat manufacturers are expected to self-certify that their products meet and exceed FMVSS, and if they do, their products are given a label so that customers know for certain that the car seat has, at least, been crash-tested.

What is a Car Seat Protector?

Car seat protectors are an accessory that’s designed to protect your vehicle’s upholstery from wear and tear. Most parents use them to protect their vehicle’s seats from messy children and any potential damages that could be caused by their child’s car seat. Just as there are different types of vehicles out there, there are different types of seat protectors - three, to be exact:

Bench seat protectors are designed for more traditional-looking backseats. They’re a one-piece cover that protects the entire backseat, and they’re meant to keep mess and debris from getting in between the seats.

Most people use this type of seat protector to protect their vehicle seats from pets and liquids. The problem, however, is that some bench protectors don’t have areas for the seat belt buckle to come through, so that’s something you’ll have to watch out for if you’re using this type of car seat protector. 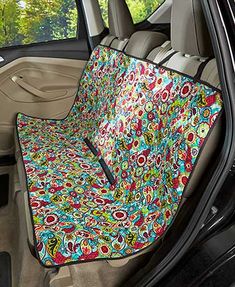 Back of Seat Protectors

It’s common for children who ride in their car seat in the forward-facing position to kick and rest their feet on the seat in front of them. If you’ve noticed this with your little one, then this is the type of car seat protector that may interest you the most.

Back of seat protectors are designed to cover the back of the driver and passenger seats to reduce the mess that’s caused by dirty shoes.

Typically, back of seat protectors will come with pockets for added storage space because they tend to block access to the pockets that are on the back of your vehicle seats.

Bucket seat protectors are designed to cover a single seat and they’re typically designed specifically for the seat that needs protection. Most parents, if there’s one passenger in the back seat, will use this type of protector. It’s a suitable choice if you’re looking for a car seat protector that will solely protect your vehicle seat from your child’s car seat or if you have an SUV.

One of the downsides to using a bucket seat protector is that they can’t be used on the middle seat, so if that’s where your child sits, then you’ll have to move them to one of the side seats.

Before I can answer what it is that makes car seat protectors dangerous, we first have to ask ourselves IF they’re dangerous. The answer to that is...there is no definite answer; it all boils down to what type of car seat you have. Here, let me explain.

If you were to ask any CPST (Child Passenger Safety Technician) if car seat protectors are safe, they would tell you it depends on where you get it from. The reason being is because some car seat manufacturers produce their own brand of car seat protectors, and then there are a lot of third-party companies out there who make them as well. But, what’s dangerous about that?

It’s safe to assume that the car seat manufacturers that make car seat protectors have extensively crash-tested them with their car seats to assure that they’re safe to use.

If you want a car seat protector that’s been crash-tested, it’s safest to buy one from your car seat manufacturer.

How to Test a Car Seat Protector 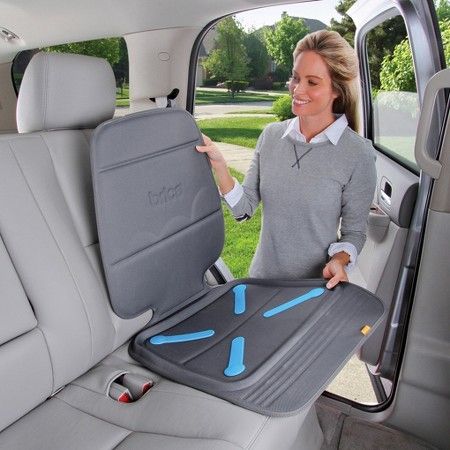 To crash test your seat protector, follow these steps:

Thin towels work just the same as receiving blankets. They’re also made out of thin material, so they would hardly get in the way of your child restraint and the vehicle seat.

Sometimes, parents will fold the towel so that there are more layers between the vehicle seat and car seat. While this may work for some people, you should know that doing this can add too much bulkiness and block the child restraint.

To test the safety of both of these alternatives, follow the same crash-test steps as you would with the car seat protector. Again, if you remove the towel after you've installed the car seat and find that it has too much wiggle room, then you shouldn't use it as a seat protector.

Car seat protectors are a popular car seat accessory that, while convenient, can be dangerous to use. They're dangerous because they can interfere with your car seat installation, which can put your child at risk of serious injury.

Also, if you purchase a car seat protector from a third-party company, there's no way to tell if it's safe to use because companies such as thee are not government-regulated, so there' no rules that they have to follow to ensure that their products are safe.

One of the safest things you can do, if you're interested in buying a car seat protector, is purchase one from your car seat manufacturer. By doing that, you can rest assured that the car sea protector has been crash-tested with your child's car seat and will not impair its performance and safety. Another thing you can do is crash test the car seat protector yourself by following the steps that I outlined earlier.

If you find that your car seat protector is unsafe to use, try using a receiving blanket or a thin towel in place of it. They're safer to use and they won't get in the way of your car seat installation.

Remember, if the accessory NOT approved by your car seat manufacturer, DO NOT USE IT.

How to Keep Toddler from Unbuckling Car Seat: The Only Guide You Need

When Do Convertible Car Seats Expire? Guides to Graco, Britax & Other Major Brands