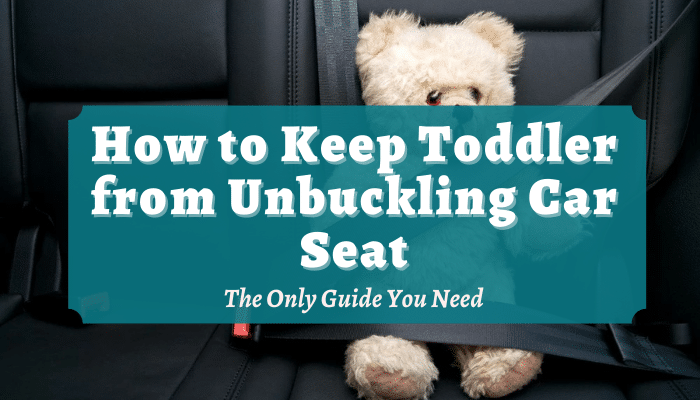 One of the biggest fears that parents face when their child is in their car seat is them managing to somehow get out of their car seats.

At a certain age, children will start remembering what steps are taken to get them in fastened in their seats, and they’ll replicate those steps to sneak their way out of their seats. While this can be adorable in its own right, it’s also very disarming for a vast number of obvious reasons. Luckily, there are precautions you can take and things you can do to ensure that your little one remains in their car seat.

In this article, we’ll discuss why it’s dangerous for your child to get in and out of their car seat as they please. To do this, we’ll take a look at stories from parents who have been accidents when their child wasn’t properly restrained. Afterward, we’ll review a handful of strategies that show you how to keep your toddler from unbuckling their car seat.

Table Of Contents
Dangers of Letting Your Toddler Get Out of Their Car Seat (What Could Possibly Go Wrong?)
What Could Happen if You Get in a Crash and Your Child is Not Restrained?
Testimony #1
Testimony #2
How to Keep Your Toddler From Unbuckling Their Car Seat - Complete List of Strategies
1. Double-check the harness fit
2. Offer rewards
3. Don’t drive
4. Ask a police officer or certified child passenger safety technician (CPST) to teach your child the importance of car seat safety
5. Mittens
6. Put your child in a button-up shirt
How to Keep Toddler from UNBUCKLING THEIR CARSEAT HARNESS
Wrapping Up

Dangers of Letting Your Toddler Get Out of Their Car Seat (What Could Possibly Go Wrong?) 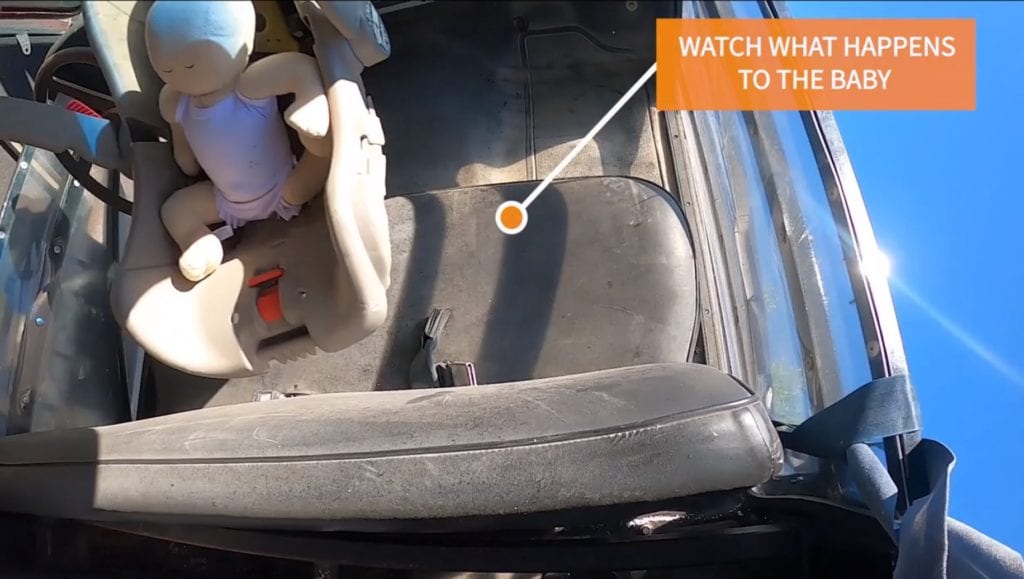 What Could Happen if You Get in a Crash and Your Child is Not Restrained?

According to the CDC, in 2017, 675 children, 12 years or younger, were killed in car accidents, and over 116,000 children were injured. The CDC goes on to list out the percentages of children that died who were not buckled, and children whose child restraint systems were used incorrectly. They are as follows:

With the data provided, we can see how important it is to make sure that your child is properly and securely restrained while they’re in the car. Doing this will ensure that your little one is as protected as they can be. To further my point, below are testimonies from parents with children whose misused child restraint systems made an accident much worse than it could’ve been had they been buckled in properly.

In 2016, a 6-year old was riding in the car with her father, but she wasn’t in a booster. Her father had forgotten to put the car seat in his vehicle, so instead, she was seated in the back seat with the shoulder strap of the seat belt behind her upper body.

While they were riding along, their car veered off the road and hit a tree, which caused the lap portion of the seat belt to dig into the 6-year old’s abdomen. At first, it just seemed like the little girl has sustained serious bruising, but unfortunately, the force of the crash caused the seat belt to shred the fat and muscle underneath.

The impact of the crash force was so much so that it cut straight through the left side of the little girl’s body and caused inches of her intestines to spill out.

In explaining how a seat belt was able to do this, Dr. Charles Bagwell, the man who treated the six-year-old girl, and chair of Pediatric surgery at the Children’s Hospital of Richmond at VCU states that when a child is thrown forward with a great amount of force, the seatbelt sort of acts like a knife.

Thankfully, the little girl survived after undergoing two surgeries and spending three weeks in the hospital. Her mother spoke with Today to spread awareness of what happened to her daughter and urge parents to make sure that their child is buckled in correctly and rides in the proper car seat. Dr.Bagwell also went on record stressing the importance of wearing a seat belt correctly and even goes as far as to say that this same situation could happen to anyone.

Something that takes two seconds to do caused a little girl to miss out on her entire first-grade year. So, please, the next time you’re in a rush or headed out, stop and take a beat to make sure that your child is buckled in securely.

In 2017, a mother of two was in a car accident that totaled her vehicle, a Honda CRV. Although her car was unrecognizable, the car seats came out of the wreckage unscratched. In her story, the mother recounts how she and her sons, a three-month-old and a six-week-old had stopped for some milk after picking up her oldest son from school. While they were stopped, a car slammed into them, but thankfully they walked away unharmed.

A paramedic who arrived on the scene shortly after the accident stated how if the boys had not been buckled in their car seats properly, the accident would’ve had a very different outcome. The mother is sharing her story with Today in hopes that it would urge parents not to rush the buckling process. She states, “I hope people will see my story and realize that car safety is not something to take lightly.”

Children may complain about having to be buckled in with a tight harness, and some are crafty at escaping. This mother of two even experienced doubt about how to buckle her children because her oldest was asking to sit in the forward-facing position like his friends from school. But, you never know what can happen, and I’m positive this mother is very grateful that she followed her instinct and continued making sure her children rode in the car correctly. 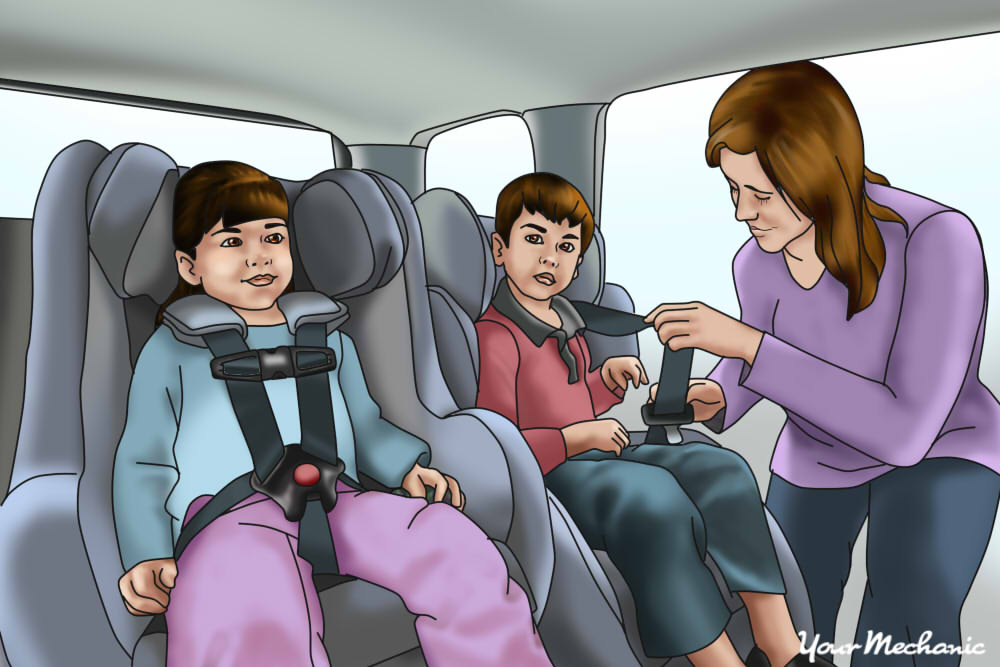 If your child is easily unbuckling themselves, chances are the harness isn’t fastened properly, or it’s in an uncomfortable place, which is why your child is trying to get out of their seat. If your child is riding in the rear-facing position, the harness straps should be at or below the shoulders. Harness straps on a forward-facing car seat should be at or above the shoulders. Once you’ve checked that the harness is in the right spot, conduct the pinch test. To do that, all you have to do is pinch the straps between your thumb and forefinger. If you can pinch the straps, they need to be a bit tighter.

Offering small rewards, like a piece of candy or phone time, is a great way to get your child in the habit of staying in their car seat. Eventually, they’ll see that when they make it a whole car ride without getting out of their seat, they get little treats, and it’ll encourage them to continue this practice until they reach an age where they can be trusted to stay in their car seat. Also, if you have more than one child that rides in a car seat, and only one of them keeps escaping from their seat, rewarding the child that listens will show your other child the benefits of following instructions. It’s a monkey-see-monkey-do type of situation that’s highly effective and recommended.

I remember my mother implementing this strategy when I was going through this phase, and it didn’t take me long to break the habit. The goal of this strategy is to teach your little one that unless they’re buckled in, the car doesn’t move. This will also open up an opportunity for you to teach your child the importance of car seat safety and why it’s dangerous for them to be out of their car seat while they’re in the car.

Sometimes, seeing an authoritative role model, such as a police officer, explain why it’s important to stay in their car seat will give your child the push they need to keep themselves buckled in. Typically, the role model will be gentle yet affirmative to hone in on the seriousness of unbuckling their harness straps.

This strategy should only be used during the colder seasons. Keeping something on your child’s hands will prevent them from being able to undo their straps. Of course, this strategy will only work until your child learns how to take their mittens off. That being said, this should only be more of a temporary solution.

6. Put your child in a button-up shirt

Before I explain what this strategy is, I would first like to say that it should only be used as a last resort. what you want to do is dress your child in a shirt or long-sleeve, buckle them in, and then put them in a button-up so that you can close the buttons around the car seat harness. Any child who struggles with the buttons on a shirt will have a hard time getting out of their car seat with this strategy. Also, much like the mittens, once your child learns how to undo the buttons, this strategy will no longer work, so it should also be used as a temporary solution.

How to Keep Toddler from UNBUCKLING THEIR CARSEAT HARNESS

At a certain point, children become crafty little geniuses who learn how to do things like get out of their crib, high-chair, and car seat. Car seats are designed to keep your child abundantly protected while they're in car, but that's only if your child is using the car seat correctly. Remember, car accidents are the number one child killer in America, so it's crucial that you're using the car seat as instructed by your car seat seat manufacturer.

If your child has made a routine of getting out of their car seat you need to find a way to put a stop to it, especially because you never what's going to happen, and it' s a thousand times better to be safe then sorry. The testimonies we went through are proof that having your child buckled in a car seat is the best way to protect them in the event of a car crash.

As we discussed in the article, there are several easy things that you can do to keep your child from unbuckling their car seat. While it isn't everything, the list provided includes the most popular strategies that parents try in situations like this. If you would like to explore more things that you could do to keep your child in their seat, contact your local CPST for a more personalised list of things to try.

Car Seat Trade-In Programs in the US: A Complete Guide (2023)

How Much Coolant Should Be in the Reservoir? [Answered]

When Do Convertible Car Seats Expire? Guides to Graco, Britax & Other Major Brands